The fashion industry is known for its ever changing trends and beautiful new designs. However, there is a darker side to fashion. Take a deeper look into the harmful history of fashion, and you will soon see how several fashion trends are in fact accessories…to murder. 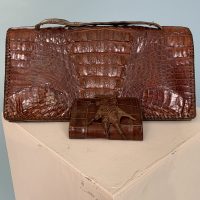 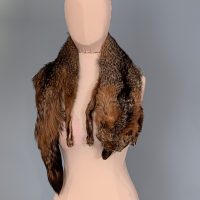 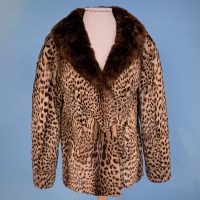 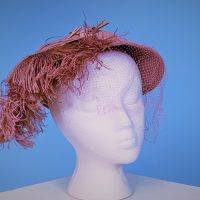 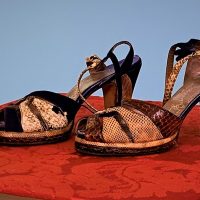 The Cost of a Handbag

While the first recorded use of alligator leather was in 1800, it would not gain widespread popularity until the 1860s. Due to a high demand during the American Civil War for leather products, alligator leather was used for boots, belts, saddlebags, and cases. However, it was not until after the Civil War that alligator leather became synonymous with status, wealth, and luxury. This only increased in the early 1900s as commercial tanning became more prevalent. However, this luxury comes at a cost which can be seen by the population reaching an all-time low in the 1950s primarily due to market-hunting. This then led to alligators being listed on the endangered species list in 1967, where they remained until 1987.

This has continued to today with alligator leather being used in luxury items, toting high price tags, and being worn by celebrities such as Victoria Beckham and Kim Kardashian. In fact, in 2017, Hermes released the exclusive white Himalayan Birkin which sold for $379,261. The handmade handbag was created from the Niloticus crocodile with over 240 diamonds and 18 karat gold. 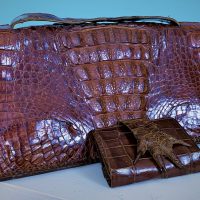 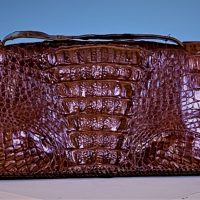 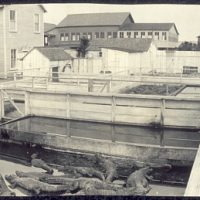 Wrapped Around Your Neck

Fox fur in its original state is a primal form of dress, but when used in the right way it can become the height of fashion. Many countless individuals and businesses develop in order to support niche markets and the desires of the consumers. Lives and fortunes rise and fall with new developments, changing tastes and demands. The fox fur industry is one that has seen its fortune rise and fall of the centuries of its existence. Fox fur shawls and scarfs used to be the desired item back in the 1920s. Reporters in London and New York commented on how scores of women could be counted walking down the streets with foxes draped on their shoulders. Certain fox pelts in the 1920s could be sold for up to $100 per a pelt and in one case four pelts were sold for $8,600. Demand and production levels were feeding off one another in 1920s America and around the world.

However, a good thing can’t last for ever. Those in the fox fur industry suffered one economic reversal after another. One of the main strikes was due to the development of synthetics, “that created lightweight, sturdy, cold-weather clothing. Even Eskimos chose to work in quilted coats with lofty, resilient fillings and save their hand-made fur parkas for ceremonial occasions.” Change killed off major portions of the fox industry. It completely disappeared at an industrial scale in certain areas, such as Alaska. Whole industries can collapse when the demands of people and fashion are involved. 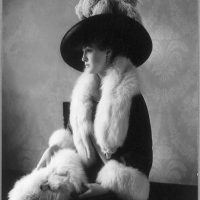 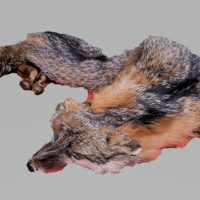 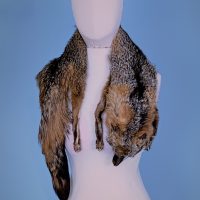 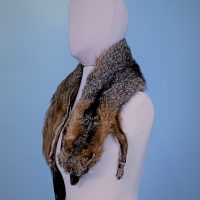 Throughout history, fur has always been seen as a symbol of status. Dating back to 6000 B.C., the “Seated Woman of Çatalhöyük,” depicts a woman resting her arm upon a leopard. Seshat, the Egyptian goddess of wisdom, was often depicted wearing a leopard hide. In wearing the fur, it was believed that humans could embody the strength and fierceness of the species.

In the early era of this fashion trend, the hunting of leopards, or any animal, was done sustainably. However, as the fashion trend gained modern popularity and man-made inventions such as traps and guns were created, the poaching of animals reached inflated levels. Many of these coveted animals, leopards included, were brought to the brink of extinction due to human influence. Poaching also leads to negative effects within the sensitive ecosystems. When predators like the leopard are removed, the animals that are controlled by these natural predators subsequently increase, which is detrimental to the environment. 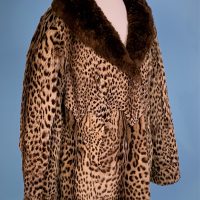 Mannequin in Leopard Coat Flanked by Leopard Skins in Window Display, c. 1943. (Courtesy of the Library of Congress) 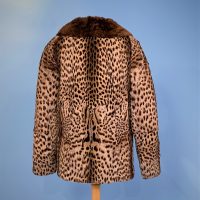 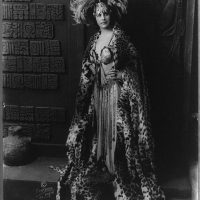 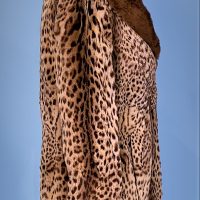 Light As A Feather

As women across the world walked down streets and into social gatherings with their ostrich plumage atop their heads, others sweated and toiled on the workshop floor. The women, men, and children who worked to produce these marvelous displays of beauty handled the feather in various ways. They strung, dyed, washed, dyed again, dried, thrashed, trimmed, finished, parried, willowed, fashioned, and curled. The majority of workers in the factories producing the finished ostrich feather product were women who received low wages and faced unsafe working environments. The wages could hardly support a single person’s needs. The women wearing these hats would never think of seeking employment within one of these factories. The ostrich feather industry was one hurt and suppressed those at the bottom. In a 1890 publication, Frank Leslie’s Popular Monthly, the murderous nature of the industry is put on display:

“One feels that the gorgeous feathers from some large factories are saturated with tears and sighs, and haunted by the shades of ruined souls… Its beautiful form and glowing color might excite in us pleasurable emotions always, if we were not compelled to feel that those forms are in some cases produced by workers whose humanity has been nearly crushed out of them, whose life’s blood has been dissipated in the varied tints and hues of the plumes.” 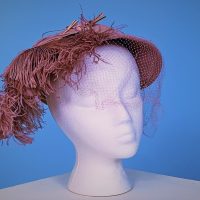 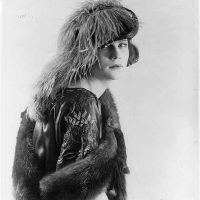 Portrait of a Woman Modeling Fur Stole and Feathered Hat, c. 1921. (Courtesy of the Library of Congress) 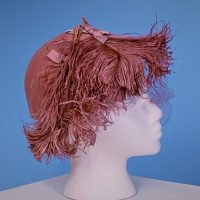 The Higher Heel, The Harder They Fall

While the controversy over the use of snakeskin has taken the media by storm in recent years, it is very similar to the conversations focused on alligator leather. Animal activists have highlighted the inhumane practices used to acquire such material. Particularly, the methods by which pythons are killed in order to use this snakeskin. While snakes do shed their skin, this skin is too thin to use as a material for bags, heels, or other accessories. Snakes are often nailed to trees and then skinned alive in order to acquire their skin. Their bodies after this skinning are often thrown into piles where they can take up to two days to finally die. There is also an alternate method in which snakes are starved which helps loosen their skin from their bodies and then they are forcibly pumped with water.

In addition to the harmful aspects of snakeskin, heels themselves have a rather complicated past. There is also a long history of how heels have evolved from their first invention. High heels were originally designed for riding footwear and they assisted Persian soldiers stand in their stirrups. Soon this trend reached Western Europe and was embraced by aristocrats, notably Louis XIV of France.

The first record of a woman wearing heels was by Catherine de Medici in the sixteenth century. It was at the end of the seventeenth century that unisex high heels began to be seen as women’s shoes and have remained a symbol of modern female sexuality. Yet despite the perceived attractiveness of high heels, Barnish’s study on “High-heeled Shoes and Musculoskeletal Injuries,” discusses the “concerns regarding the potential impact of high heels on women’s health have been expressed in medical circles for over 50 years and in 2001 podiatrist William Rossi declared footwear to be the primary cause of foot disorders.” Long-term wear of high heels can lead to a shortened Achilles tendon and can even lead to arthritis in the spine. 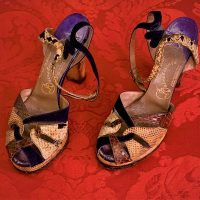 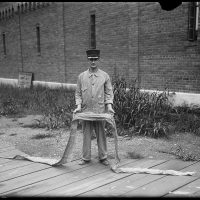 Man Holding a Long Snake Skin, c. 1931. (Courtesy of the Library of Congress) 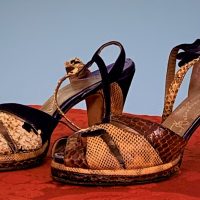 Become A Designer: Design Your Own Bag

Get A Clue: Fashion Scavenger Hunt