Since the American Revolution, American women have advocated strongly for their education. They argued that to raise their children to be well-informed and educated citizens, they too must have an education. Some women, such as Margaret Fuller (1810-1840), were educated by family members as if they were one day to be candidates for the all-male colleges, such as Harvard in Ms. Fuller’s case. She would never be admitted to Harvard, but grew to be internationally renowned for her intelligence. Throughout the years, Ms. Fuller taught at various schools in New England, but still never was allowed to have the college admission promised to her brothers, whom she taught. Women such as Margaret Fuller were not wholly uncommon; many young women desired to be taught the same as the boys. In the years before the Civil War, the public school system spread across America, and more girls were being educated, with the first girls receiving a Bachelor of the Arts in 1841 from Oberlin College. With the spread of the American public school system after the American Civil War, more girls than ever were being educated, and the need for teachers grew. In 1870, three out of five teachers were women; it was one of the only jobs they could hold and still fit within societal norms. 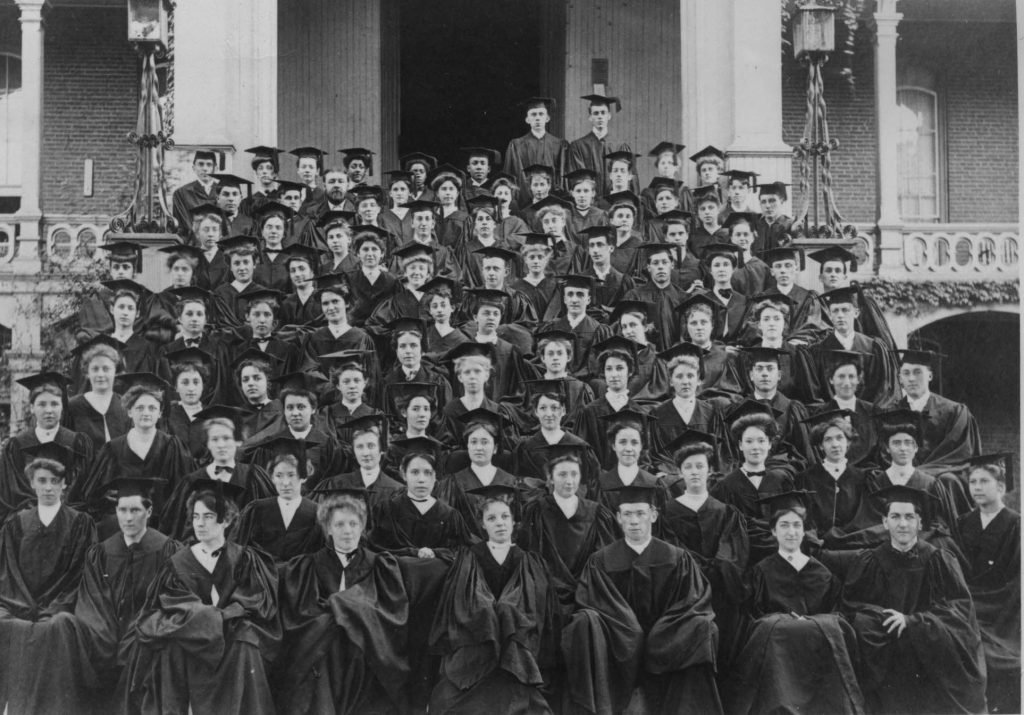 An early graduating class of C.V.S.N.S., Courtesy of the Shippensburg University Archives

According to the education reformer Horace Mann, women were encouraged to teach based on their “natural love of the society of children, and the superior gentleness and forbearance of their dispositions.” Those future teachers needed an education, so women began attending the many women’s colleges and few coeducational Normal Schools. In 1850, there were seven Normal Schools in the United States, the first Pennsylvanian one opening in 1859. An 1857 law divided Pennsylvania into thirteen districts, each of which could build a private Normal School that would receive approval from the state. After a failed attempt to open the Normal School for the Cumberland Valley in Newville, the people of Shippensburg began organizing a school in their town. 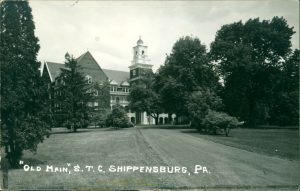 In spring 1871, the Cumberland Valley State Normal School’s cornerstone was laid for the building today known as Old Main at Shippensburg University. February 21, 1873, the commonwealth of Pennsylvania officially approved of and recognized the school, with the first class of a little over 200 students being welcomed mid-April 1873. The school was coeducational from its beginning, striving to educate both young men and women equally, though they were incredibly segregated with strict rules enforced by the professors. Students were prohibited from meeting one-on-one, needing to be in groups of three or more, note writing was forbidden, and there was even a black line dividing the chapel that students were required to attend once a week. 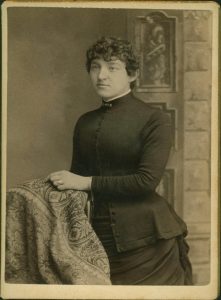 A young lady poses for her senior portrait, 1880s, Courtesy of the Shippensburg University Archives 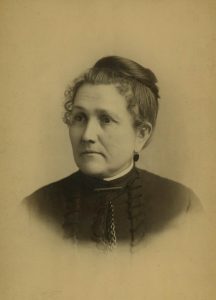 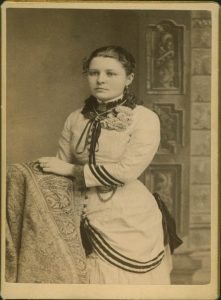 A young lady poses for her senior portrait, early 1880s, Courtesy of the Shippensburg University Archives 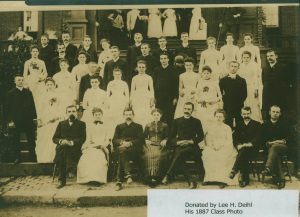 CVSNS Class of 1887, Courtesy of the Shippensburg University Archives

Sarah Rees Hogan became a professor at C.V.S.N.S. in 1875, where she remained until her marriage in 1883. Though there are no surviving pieces she wore during her time at the school, her white muslin three-piece summer dress is similar to what would have been worn by both professors and students during the warmer months of the early 1870s. Another dress worn by Professor Hogan is the brown silk faille dress.  Dated to be from 1887-1889, the tan and dark blue fabrics of velvet and silk reflect the trends of the late 1880s that many Normal School students and staff would have followed. During late fall and winter term, coats such as the 1885 wool redingote would have been worn by the ladies on campus while outdoors or perhaps to go on a chaperoned sleigh ride with the young men. Faculty often served as the chaperones of social events, such as organized socials, where young men and women could play games and dance with each other, but only on special occasions, when girls would wear their best dresses. In a trend comparable to working women’s past and future, women university staff were paid less than their male colleagues seen with Professor Hogan’s May 1876 paycheck of $60 for the month, $500 per year. 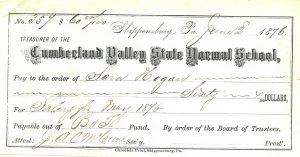 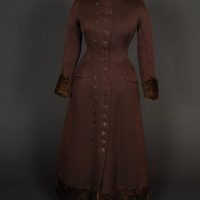 On colder days in the 1890s, the ladies of C.V.S.N.S. sported capes similar to the black one worn by Professor Hogan in the 1890s. They might also relax in their dorms in wool wrappers such as the red one that belonged to a woman in Richmond, Virginia, in the mid-1890s. At night, after the young ladies’ had completed all their homework and when 10 p.m., the lights out time passed, the boarding girls donned their nightgowns and slept until 5:30 a.m., the time the school dictated students would wake. The women professors would have worn dresses in the style of the cream dress with burgundy bows and flowers, worn by the former professor Sarah Rees Hogan, now Mrs. Boher. They would have worn dresses in the same style while teaching and supervising student meetings, such as the newly formed Young Women’s Christian Association, or Y.W.C.A. club on campus, established in 1891. 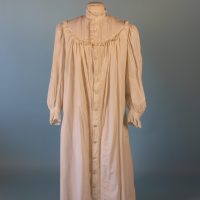 Professor Hogan’s dress, ca. 1898, similar to those worn by other professors when teaching S1981-14-045 Boher-Hosfeld A girl poses for her senior portrait, 1880s

Between 1874 and 1904, 920 girls called themselves alumnae of C.V.S.N.S., fifty-four percent of all graduates. During the commencement ceremony, it was a tradition for girls to wear white at graduation, as seen in the 1907 graduation dress. The lightweight dresses worn by the girls reflected the summer season. By 1912, all students were enrolled in the four-year course of study that was offered. However, those students did not go without fun. Dr. Martin, in 1908, began holding dances after dinner and on Saturday afternoons “In order to stimulate social graces and to teach the students to conduct themselves properly.” At these dances, girls wore dresses similar to those worn by Marjorie Elliott Boher Hosfeld while she was a student at nearby Wilson College in 1910. Faculty had difficulty enforcing the rules of the dances, with many students being reprimanded for dancing “too close,” “too much,” or “not enough.” 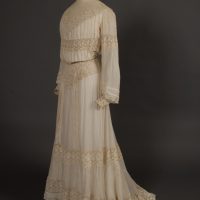 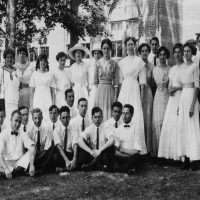 Students pose for a picture on a warm day in the 1910s, Courtesy of the Shippensburg University Archives 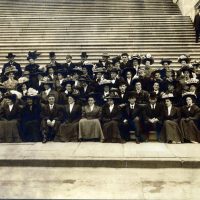 Class of 1910 on their trip to Washington, D.C., Courtesy of the Shippensburg University Archives 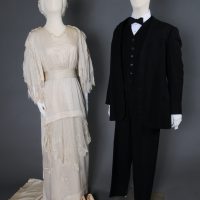 Dr. Ezra Lehman was elected the principal of C.V.S.N.S. in 1913, an alumnus of the school. His sister-in-law, Floie Mae, was also an alumna. Her dresses from the early twentieth century are similar to those that would have been worn by faculty. Though male professors could be married and hold their jobs, the same could still not be said about the women who worked for the school. Mary Whitman worked at C.V.S.N.S. from 1910 to 1914; her wedding dress is similar to those worn by other brides of the Edwardian Era. The difference in pay between the men and women employees was another form of injustice. A 1912 report of the Pennsylvania State Normal Schools states that the average salaries of women teachers was about $780, and about $1,200 for the male teachers. The report then describes how, along with the professors’ teaching duties, they must also keep watch in the dorms, and the women professors help the women students plan and implement social activities. 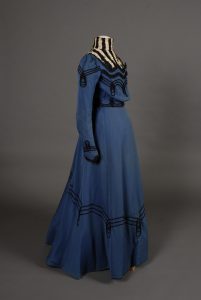 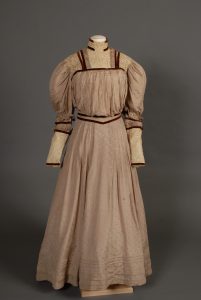 The most significant change to the Cumberland Valley State Normal School during this time was the change made to first its ownership and then its name. As with all the Normal Schools in Pennsylvania, the state bought the school in 1917. The year 1926 was the first year in the school’s fifty-five-year history where it was not called the Cumberland Valley State Normal School, but rather Shippensburg State Teachers College. In fall 1921, the girls’ dormitory was lit for the first time with electric light rather than the gaslighting that was originally installed. However, despite these “modern” additions to the girls’ housing, the rules they had to obey stayed relatively the same. Dresses and skirts were the only outfits that women were allowed to wear on the campus for the first one hundred years, reflecting what was deemed “acceptable” by society. In the spring of 1914, the first girls’ field hockey team was formed, and fifty girls bought equipment. After World War I, intramural girls’ basketball became popular, with the girls being recorded to get moderately violent in their games between the different classes. It was decided that the girls would wear bloomers, baggy wool pants while playing basketball and pursuing any other sport. Myrtle Shipp’s (‘ 23) gym uniform represents the styles worn by girls while participating in athletics on campus. The pants’ bagginess follows the style of Turkish bloomers but would not have been considered scandalous as the ladies wore them only in the company of the other women playing the sport in Stewart Hall or the fields. 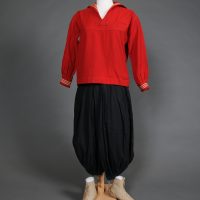 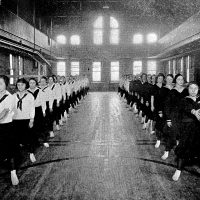 The girls’ basketball teams in Stewart Hall, Courtesy of the Shippensburg University Archives 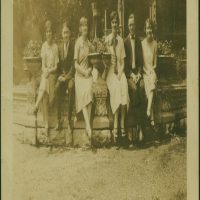 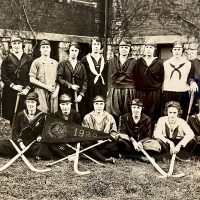 Girls on a snowy day in 1923, Courtesy of the Shippensburg University Archives

The first fifty-six years of Shippensburg University saw many different women and even more fashion choices as they went about their days teaching and learning. Today, Shippensburg University has grown far beyond the school they knew and loved. It is no longer strictly a teacher’s college, though students who graduate from Shippensburg with Education degrees are still highly sought after by schools in Central Pennsylvania. Today the rules that girls follow on campus are the same as the boys, which are scarce compared to those of the beginning years. Most notably is the dress code, which cannot be found in a modern Student Code review due to its abolishment in 1970. Women of the University, professors and students alike, today can be seen in every style of clothing: shorts, t-shirts, jeans, leggings, sweatshirts, as well as dresses and skirts, whatever the individual prefers. Women professors can be married and still teach, enjoying the same amount of respect given to their male colleagues. Many things have changed for the school’s women at Shippensburg since 1871, but the desire to learn has never faded for the thousands of women who have called Ship home.

with assistance and encouragement from Dr. Bohleke and Dr. Dieterich-Ward