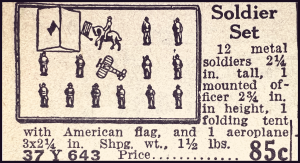 Toy soldiers have been around since ancient Egypt. They were originally made of wood, stone and clay. They were only created for the rich. It was not until the late 18th century that they were made of metal, and were produced for everyone. The first metal soldiers were made out of solid lead making them more expensive. In the 20th century, they started to become hollow, making them cheaper to produce. These soldiers were created to look like the armies of France, England, and Germany. It was not until after WWII that plastic toy soldiers were made.

How To Play: Use your imagination!! Can you recreate any real battles that have happened?